The Kevitsa open pit mine in northern Finland, in operation since 2012, was acquired in June 2016 by the Boliden Group, a high-tech metal company based in Stockholm, Sweden. The Kevitsa deposit, first discovered in 1987, is one of the largest ever in Finland. The ore concentrates from the mine are supplied to Boliden’s own smelting plant in Harjavalta and to external customers. Currently, Kevitsa has 500 employees who work with about 300 contractors.
In 2018, 7,6 million tonnes of nickel, copper, gold, platinum and palladium ore extracted from the mine were processed. Production at Kevitsa is expected to last until 2033, and once the mining on site comes to an end, the area will be ecologically restored.

On a journey towards constant development and a more automated, efficient and safe working environment; Kevitsa reached a milestone in early July 2019 when it officially took delivery of the first of 17 Komatsu 830E-5 dump trucks ordered from Suomen Rakennuskone (SRO), the local Komatsu Distributor. These Komatsu rigid dump trucks (RDT) are equipped with a diesel engine that drives a generator producing electricity for the drive motors inside their rear wheels.

The new 830E-5 Komatsu dump truck, capable of carrying 220-tonne nominal payloads, is the first Komatsu electric dump truck at Kevitsa, but also in Europe. The 830E-5 dump trucks that will be delivered to Kevitsa are manufactured in the US and will be assembled in Finland, by SRO. Globally, over 1,940 Komatsu 830-series trucks are already working in mines and quarries, most of them in North America. 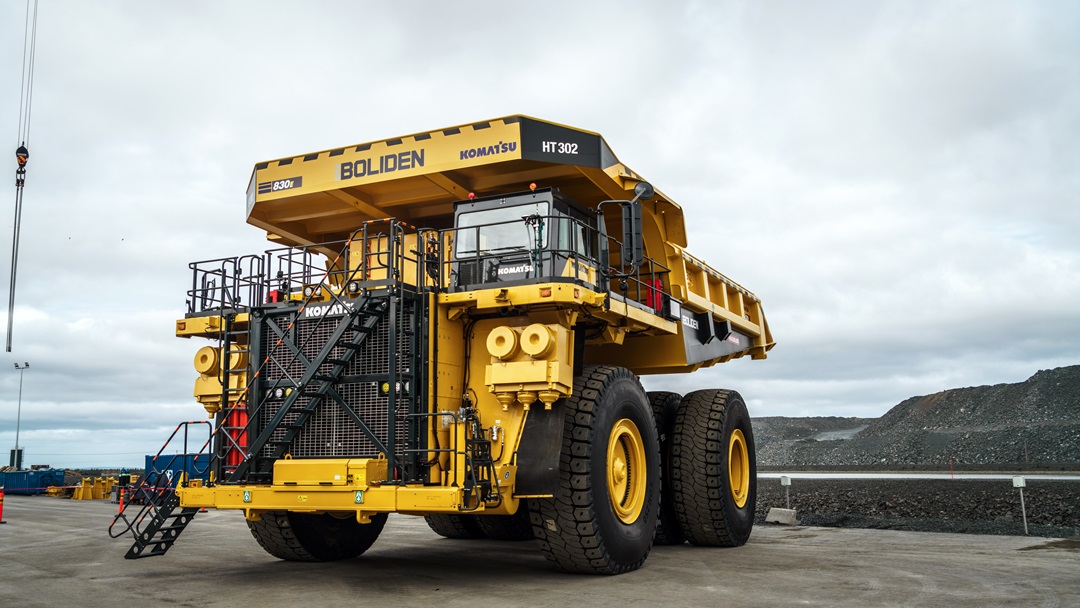 The electric drive is not only one of the main functionalities of the 830E-5, it also increases operator comfort. Comfort is further enhanced by a car-like interior, a full-sized trainer's seat and a cabin 40% larger than on previous models. In addition, there are no interruptions to the drive power, as there is no need to change gears.

In accordance with Boliden's development goals, the new fleet of 17 Komatsu dump trucks will include specific structural capabilities to allow them to be converted to full electrical “trolley” operation in just four weeks. In addition to conserving energy, a central advantage of the trolley is to provide trucks with twice the speed of a diesel-electric model when driving uphill with a full payload.

The future is electric

On July 10, 2019, at the event held for the delivery of this first Komatsu 830E-5 truck, Esko Pystynen, Kevitsa Mine Manager, highlighted the importance of a cooperation network for becoming an exemplary mine that others could benchmark.

He said “We have a clear goal at the Kevitsa mine. We want to become a reference for our partners in the industry. We must work together to accomplish this, and constantly improve our operations.”

Diego Santo, Director of Sales at Komatsu America dump truck plant, said that the Komatsu 830 E-5 is “not the cheapest” but provides low costs per transported tonne. Komatsu can replace any main component of the dump truck within 24 hours.

Boliden CEO Mikael Staffas highlighted the company’s ability to integrate locally, as it has done at Kevitsa where the mine provides a large part of the activity in the area. He also presented Boliden's conservative values in a positive way: “We avoid taking big risks and operate safely. In contrast, we want to adopt the latest electrical technology to promote our goals, including better safety. We want to be number one in this aspect as well.” 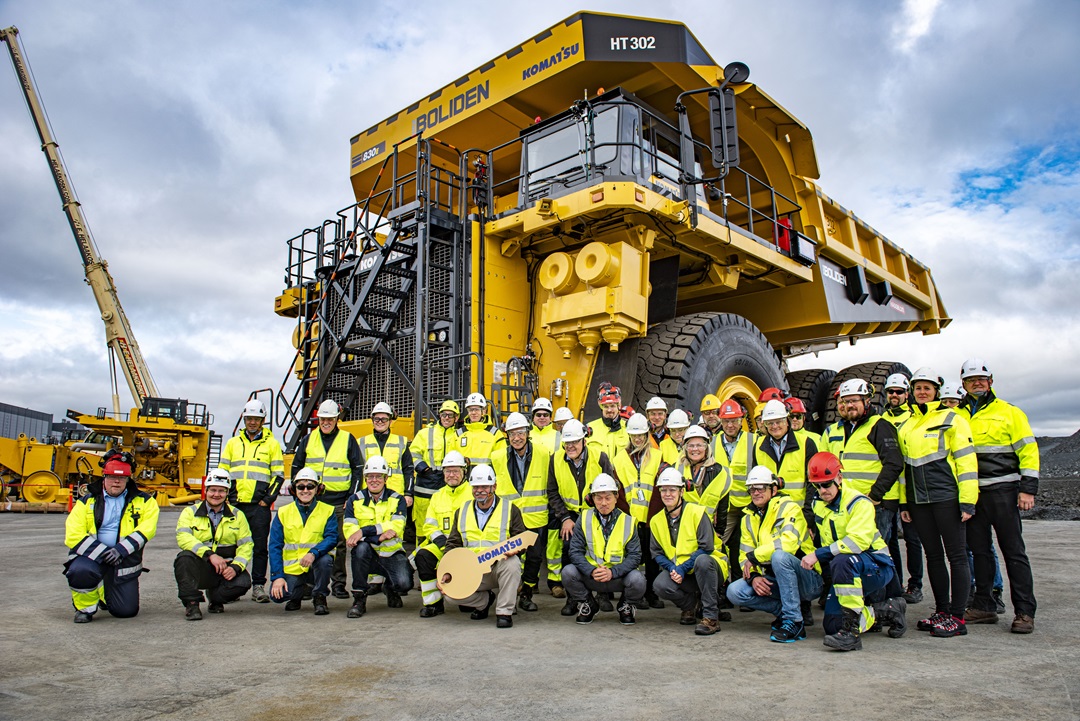 Attending representatives from Boliden, Komatsu, component suppliers and Suomen Rakennuskone (SRO) at the Komatsu delivery event at the Kevitsa mine. 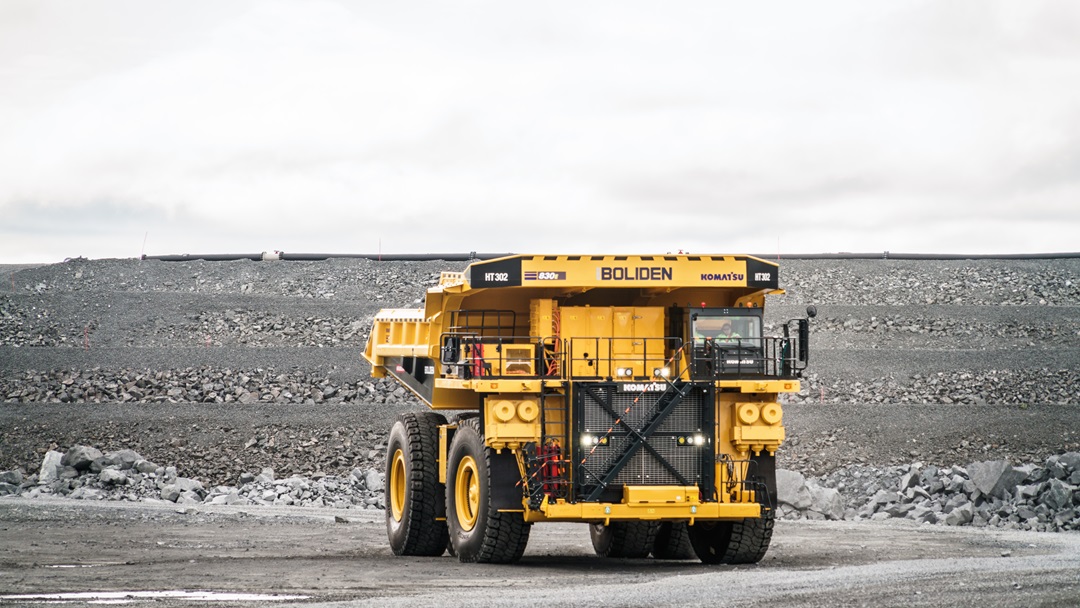 The Komatsu engine is a 16-cylinder SDA16V160 U.S. EPA Tier 4 Final 1865 kW (2500 HP). SCR is used for reducing exhaust emissions. The electric motors in the rear wheels are used as generators to produce electricity for cooling. The wheels are equipped with traction and spin-slide control. The power of the electric retarder is 3207 kW. The parking brake keeps the truck stationary with a full payload in a ±15% incline. The maximum speed of the truck is 64 km/h. The total height of the truck is 7,15 m, the width measured from the mirrors is 8,95 m, the greatest length is 14,65 m and the loading height is 6,36 m. 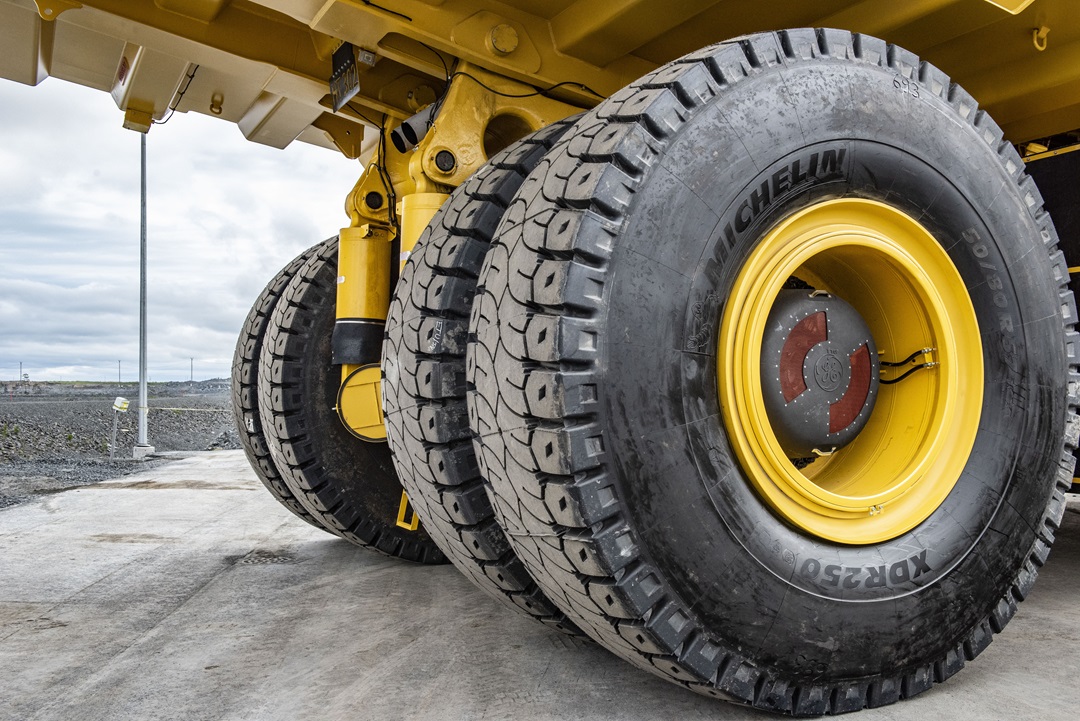 There is no differential in the rear axle. Instead, there is a chamber that leads to both hubs and that is used to force the powerful flow of air coming from behind the cabin to cool the wheel motors. The manhole is airtight and a retractable ladder to the chamber is located behind it. The tyres are Michelin XDR250, size 50/80R57. With a full payload, the rear axle carries approximately 67% of the weight, about 274 tonnes. 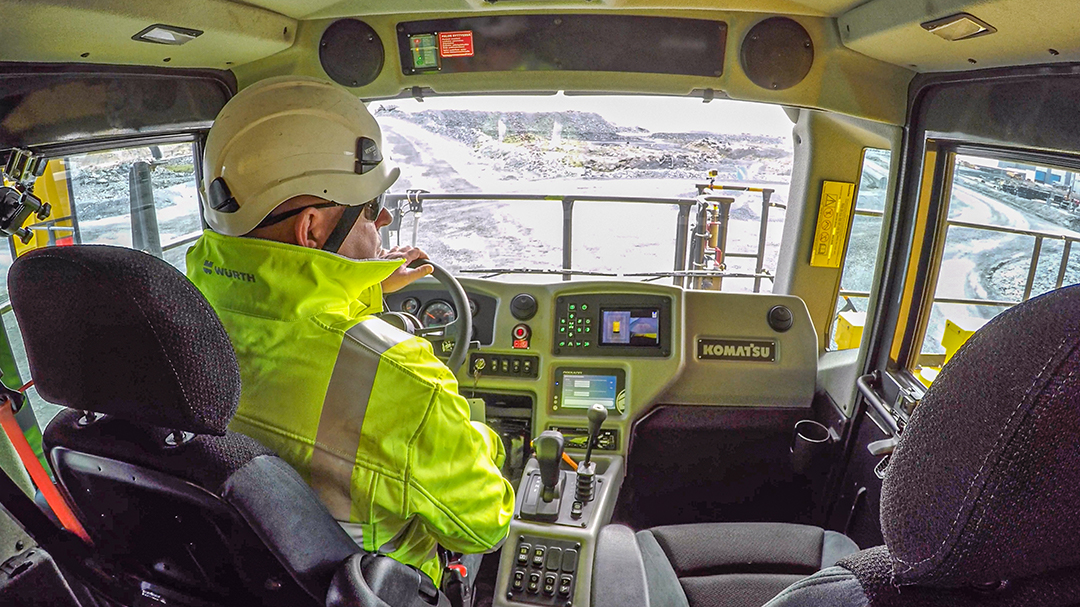 The cabin of the Komatsu 830E-5 is exceptional. It seems more like a truck cabin. The trainer’s seat is full-size with enough space.

Visibility is good from a height of five metres and the surroundings of the entire machine can be seen in detail using the KomVision display. The Komatsu Payload Meter gives the operator precise loading information, loading times, work cycle durations, maximum speeds and a lot more. The turning radius of the 14,65-metre long machine is only 14 metres. The cabin has tinted safety windows.